The Book Thief by Markus Zusak

Yeah. When death tells a story, you have to listen.

This book is unlike any other I have read. I had been recommended this one first almost an year back, then many a times by many people, or actually by everybody who cares to discuss books with me. But somehow my rendezvous with Markus Zusak and his narrator, 'death', had not happened. I happened to chance over it in a mall in Bangalore this December, when I was least looking for it, and I was like "God! This is the book I have been dying to read." I bought it and started with with it right away and for the next 6 days, tasted heaven. In mouthfuls. Again and again and again.

A short synopsis before I move on to what makes this book unforgettable for me.

A loveable young German girl who comes of age during WWII is the protagonist of the story and it is Death that narrates her story, taking help from the book she wrote as a journal. She loses everyone she knows, one by one, and you get to know that it was not the Jews alone whose lives were at risk during the war. It presents that side of the story which has gone unheard so far, in such a balanced way that you can't hate a blue eyed German anymore, just because he is a German and just because you had a chance to leaf through Mein Kemph sometime back. The Jew in the story, his relationship with the little Liesel, in fact the relationships of Liesel with the different characters in the story, including what Death has to say about each of the characters, is haunting. The story is haunting and so are the words. But let's reserve what I have to say about the words till later.
Liesel's innocent love with Rudy blowed my mind and what happens to Rudy just before the end shattered my soul. I had come to love that stupidly gallant young boy of 13 the most of all characters and it killed me to know how Zusak ended his role in the story. There were however so many such moments, so many such characters that I knew I still had to go on with the story, though I must tell you that this is no page turner. The pace is very slow and is not meant for those who like to run through their books. This story is supposed to be savored, slowly, and re-read again and again. Every character is well researched, as in the wealth of details and a story for each of them. No character is there just as a backdrop for the story of another. Each has a life of its own and you are taken on a journey with each and every on eof them, falling in love with each and every one of them, even those you thought impossible to love initially. 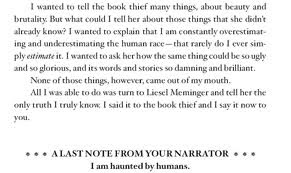 There are many things that make this a masterpiece, apart from the choice of Death as the narrator, and imbuing Him with a 'colourful' personality and the way Zusak romances with words of course. The kind of metaphors that are used, the way in which words are combined, is breathtaking. There are no difficult words used, nor is the language difficult due to syntactic complexities but simplicity has been adorned with beauty in such a manner that language is what's going to stay with you longer than the story. The beauty of the  language used is so surreal, so magical, without any embellishment that you fall head over heels in love with the writer, again and again. You fall in love with the beauty of words. You fall in love with life, that made it possible to partake in the bliss of having this book caress your soul.

There were many times when I loved some particular sentence so much that I read it again and again till I could recite it with closed eyes. And cry you will, I bet, not just because of the haunting story but also because of the blissful intoxication of the words that does something to your heart. Another thing that is strange is that suspense is totally absent as our narrator finds it boring! Yet your heart is broken so many times and mended so many times that you no longer care about what might happen next and just let the tears flow.

Yeah, this book does that to you. It did that to me.

View all my reviews
Posted by sudha...a touch of madness at 1:19 PM

Hey there! Your comment might prove to be just the push needed for me to write more frequently and with a bit more thought and planning. Do take out a minute or two and tell me what you felt about this blog or this post of mine and any suggestions you think might prove to be useful. Your comment is highly awaited...

I blog. Therefore I am.

sudha...a touch of madness
Mumbai, Maharastra, India
A lover of poetry. A student of psychology. A Feminist with a capital F. A TISSian out and out. And a hopeless romantic.

The tiny legion of' My Followers

This blog has been awarded, thrice:

Thanks Anupam Sir, Aashish and Shrishti :)

They call me an expert here

Hottest on this blog

None of the images are owned by me unless otherwise specified. All are from google image search. No copyright infringement intended.

"I have always imagined that Paradise will be a kind of library."— Jorge Luis Borges

A reluctant poet, just out of the closet :D

The Lid Is Lifted

Promote Your Page Too